Natural Area of the Tabernas Desert

The Desert of Tabernas is located about 30 km north of Almería city in the municipalities of Tabernas, Gádor, Santa Fé, Alboloduy and Gérgal. Protected as a Natural Area, it covers 280 square km.

Some plants have developed small hard leaves to reduce transpiration, even photosynthesising during the night, like Anabasis articulata that colonizes a great part of rambla margins (dry river beds). Some ephemeral plants lack the necessary systems to withstand the long droughts, like Linaria nigricans. Nevertheless, they have a very accelerated metabolism and very short vegetative period. Their seeds can germinate and grow very rapidly, completing their evolution in a short time, enough to bloom and generate new seeds which await the next wet season. Other species confront the harshness of this environment by being succulent, or having the capacity to store water inside, like Apteranthes europaea. Other techniques are to develop large roots to capture superficial water which causes separation between plants, or vertical roots looking for underground water, or by having organs indifferent to solar radiation, like bulbs, tubers, or rhizomes. The presence of prickles is one of the defensive systems that a great number of bushes and shrubs have developed. 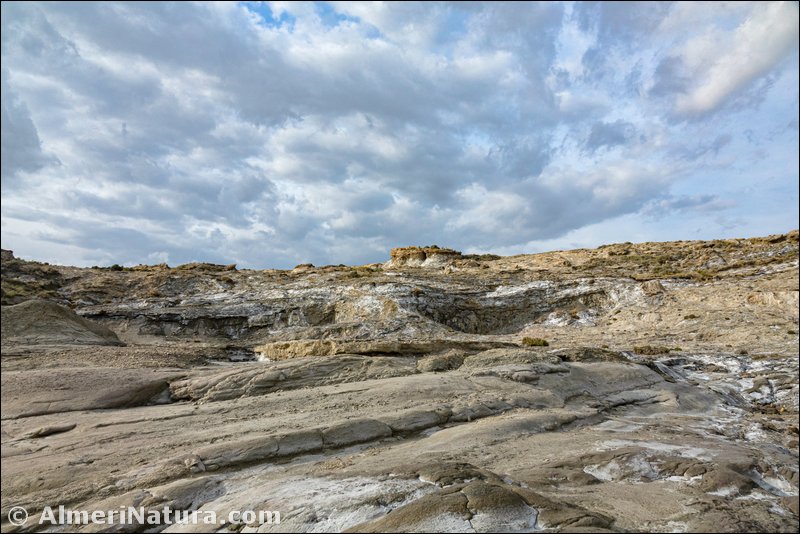 There are also parasitic plants that obtain fluids from the roots of other plants, like Cynomorium coccineum. Some of the most common species are salsola, esparto grass, and the aromatic thyme (Thymus hyemalis and Thymus baeticus) and artemisia that help to fix the soil. On rambla margins, different species can be found that take advantage of the underground water, like tamarisk, broom, oleander, and fig trees, and bushes like the endemic Limonium tabernense, the pink Limonium (Limonium insigne) or and Almeria’s rockrose (Helianthemum almeriense), both endemic to the south east of Spain. We can also find plants like the rare Moricandia foetida, that blooms after spring rains on clay slopes. The numerous ramblas scattered in these burning landscapes are the only ecologically different elements in the desert. In these microclimates generated by the underground water, bushes of tamarisk and oleander grow where nesting birds find shelter, like the serin, blackcap and turtledove. In this area there are also real oases around water springs which are almost always saline, that cause the growth of dense salt tolerant vegetation, in which sedges and tamarisk compete with saltworts, salsolas and other Chenopodiaceae, one prevailing over the other depending on the amount of soil salinity. 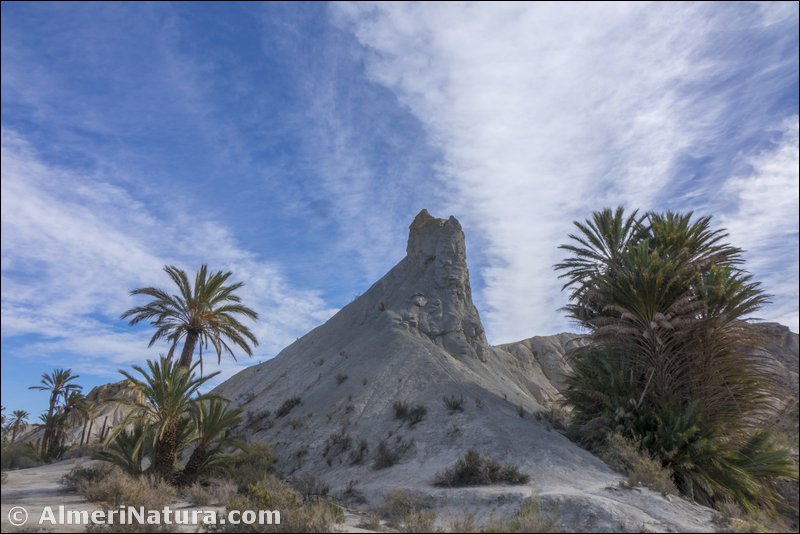 The distribution of fauna depends on several factors such as the presence of water sources or the humidity of ramblas, and the areas of sun exposure or shade. We can differentiate two kinds of main habitats - hills and ramblas. The abundance of bees and other insects that drink nectar, make up the main diet of some species such as bee-eaters, which make their nests in deep holes carved in rambla slopes so that they are protected from predators such as the horseshoe whip snake (Coluber hippocrepis). Red-legged partridge nest in the esparto covered hills. Peregrine falcons, Bonelli's eagles, and Golden eagles that live in Sierra Alhamilla use these areas as their hunting territory. Eagle owls hunt rabbits and small rodents. There are also foxes which hunt at sunset and in the night. A number of birds nest on the slopes of the ramblas; stock doves, kestrels, little owls, jackdaws, crag martins, alpine swifts, wheatears, sparrows, and also trumpeter finches that usually live in Saharan oases. The small tamarisk groves and the vegetation beside the ramblas are the preferred places for several species of birds, such as warblers, goldfinches, serins, golden orioles and even water birds like sandpipers, plovers and egrets. We also have steppe birds like dupont’s and thekla larks, stone curlews and little bustard. Mammals are more limited due to the aridness of the land, although rabbits, hares, dormice, and European and Algerian hedgehogs are abundant. In ramblas, amphibians like common frogs and natterjack toads, reptiles like red-tailed lizards, ocellated lizards and ladder snakes are also abundant, and can be found in any suitable habitat. 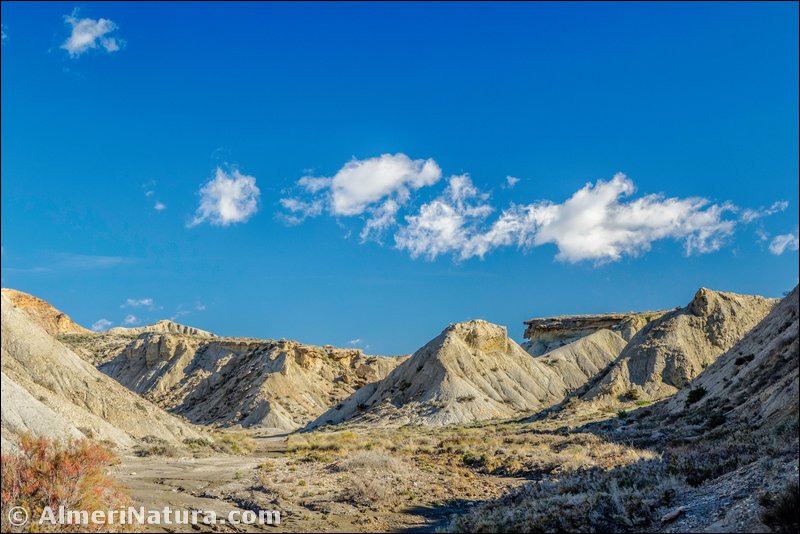