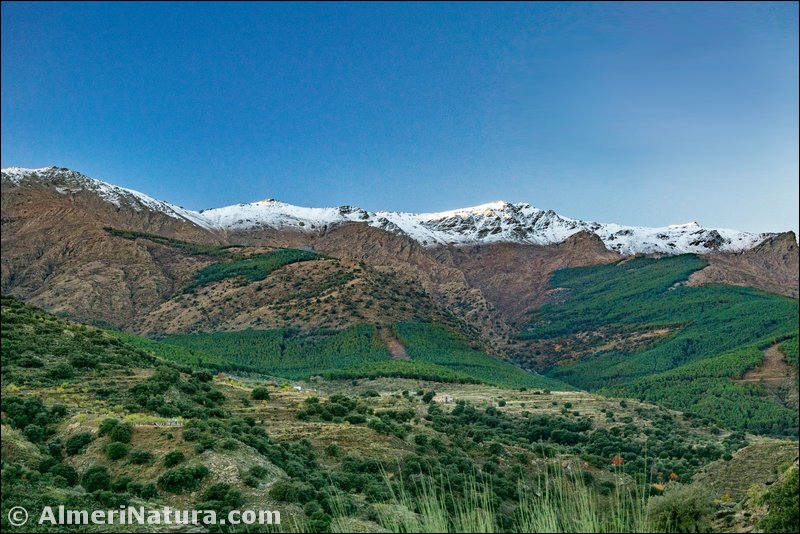 Sierra Nevada is a mountain massif within the Betic group, or more exactly, the Penibetic system. It extends through the central-south east of the province of Granada and part of the south west of the province of Almería. In 1986 it was declared a «Biosphere Reserve» by UNESCO. In 1999 a great part of the territory was declared a National Park for its botanic, landscape and natural values. It is the highest mountain massif in Europe after the Alps. Its maximum height is reached at the Peak of Mulhacen 3,482m. In Almeria the maximum height is the Peak of El Chullo at 2,610m. It has a length of almost 80 km and a width of 15 to 30 km covering an area of more than 2,000 km². Most of it is within the National Park of Sierra Nevada, a total of 86,210 ha. Another 86,000 ha belong to the surrounding Natural Park.

Sierra Nevada, along with the Betic ranges, was formed during the alpine orogeny in the Tertiary era. Due to its isolation and altitude, since the end of the Würm glaciation, the massif has remained as a refuge to countless plants and endemic species, not normally found in Mediterranean latitudes. There are 66 endemic vascular plants and another 80 animal species, which represent the greatest biodiversity in the Iberian Peninsula and Europe. In total the number of higher plants is around 2,100, which is a quarter of all known species in Spain and a fifth of those in Europe. 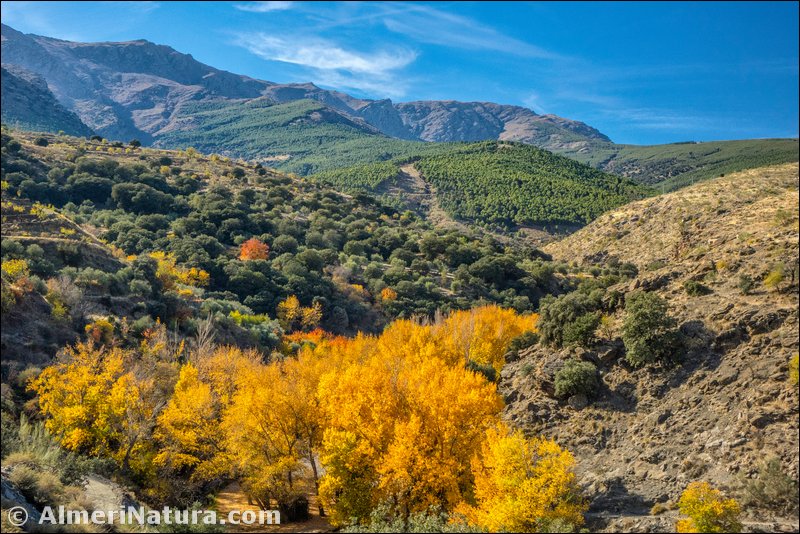 The origin of this unusual number of endemic species present in the massif was in the Tertiary, almost two million years ago. With the end of this era and the arrival of the Quaternary, the climate all over Europe suffered a progressive drop in temperature that allowed plant species from northern and artic latitudes to advance towards the South of Europe and occupy a great part of the inland and high areas in the Iberian Peninsula. The end of the Würm glaciation and the arrival of the Holocene period marked the beginning of a progressive rise of temperatures. These Nordic species found refuge in the massif and progressively adapted to the characteristics of the climate, such as summer drought. In that way, many species have developed their own characteristics or even developed independently due to their isolation. That is why there are more endemic plants here than in Belgium, Germany, Austria, Great Britain, Sweden, Denmark, Czech Republic, Slovakia, and Poland together.